We had our annual conference this past Saturday, and while I have been looking forward to it, I had no idea that it would turn out as wonderfully as it did. (Here's a post from the author's point of view at Book Addict and another at VonnaCarter.) 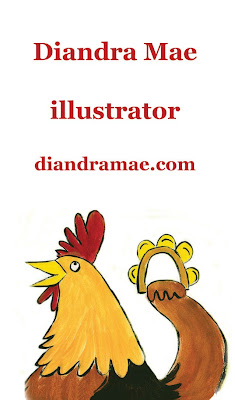 Usually before a conference I go into a kind of frenzy trying to update my portfolio with a bunch of new pieces, ordering new postcards, the works. This time I took it easy and reordered some cards and that was it. I think it worked in my favor.
I was able to spend most of my time focusing on making sure illustrator events ran smoothly, and catch a few of the wonderful speakers. I was thrilled when I heard that we had the most illustrators attending our conference in our conference history! Woohoo! The highlight of the conference for me (and probably most of the illustrators) was the fact that we had an Art Director present. 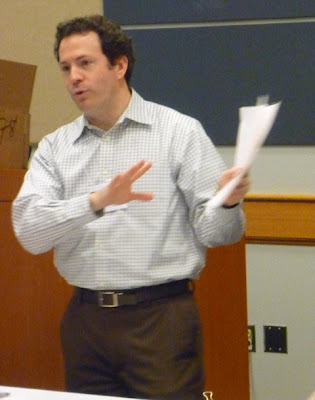 Patrick spent most of his time at the conference giving portfolio critiques. I think the critiques were the biggest draw. I know I appreciated every minute of mine. Patrick commented on the strengths and weaknesses of my work, and even gave a few suggestions on how to play to my strengths. I can't say I was really shocked by anything he told me and I think that was the best part. I've learned how to be critical of my work in the most honest way.

During lunch I announced to everyone that the portfolios were still up and open for viewing if anyone was interested. I was pleasantly surprised that a few minutes later there was a line wrapping around the portfolio room of people who wanted to look at all of our work! People really were interested in supporting illustrators!

After lunch the next event for illustrators was the break-out session, "The Picture Book Dummy." It was almost two hours long, and it still almost wasn't enough time! But Patrick really wanted us to get everything we could out of it, so we worked at a breakneck pace. 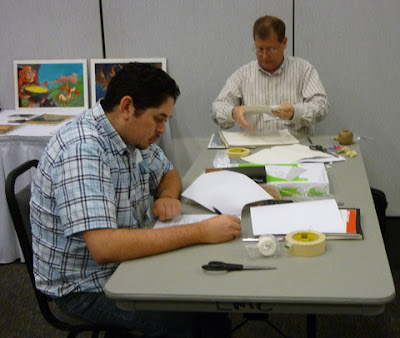 Ryan Shaw and Anthony Quandt trying to not freak out over how quick we're working.

First Patrick showed us the simplest way to make a dummy book using a large rubber band, 11x17 printer paper, scissors and masking tape. I am SO glad I learned this method, because it was way easier than anything else I've tried.
Then we received a manuscript and had to read through it, numbering the page numbers and figuring out where the page breaks would go. After that we cut out and taped down the text in our dummy, and then had to sketch out the book. I noticed as we were working that my mind kind of shut off and moved into an auto mode.

We finally finished up, then Mr. Collins had us all share our books. He then went through and critiqued each one. There was a lack of early character introduction in many of the dummies. Patrick said he wanted to meet the characters right away. It was interesting to see how similarly many of us interpreted the text. It seems we have a common visual vocabulary that we pull from to explain what certain words mean. Impetus to think outside the box, I think. 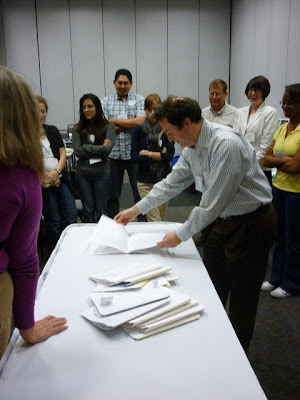 It was funny how so many people DIDN'T want to claim their books!
After our break-out session ended, we gathered our things and headed back to the main room where there was a Q&A Session as well as the final door prizes, raffle winners and awards to be given. I was pretty drained at this point, and glad we were on the home stretch. I finally started to allow myself to zone out, so when they started awarding prizes I was startled to hear my name! You guys, I WON THE PORTFOLIO DISPLAY CONTEST!

I was in shock all the way up to the podium, and for the rest of the conference. I received many congratulations and smiles and that finally made it sink in that it was real. Boy was I surprised! Even better, after the conference when we were chatting in the atrium, Patrick pointed out what he thought were my best pieces and gave me some strong encouragement to continue on the path I'm on and to keep on working. It felt wonderful to hear someone tell me that what I was doing was the right thing!