The final was completed for the piece I started for-ever ago. I'm really happy with it, but unhappy with what happened to the background when I scanned it in. The floor and wall colors are really light, and have been completely washed out. I'll need to play with the scan settings and try to balance it out for the color copy I'll need to print out. For now it works.

Here is one of the first sketches I did when I decided I wanted to explore this character a little more: 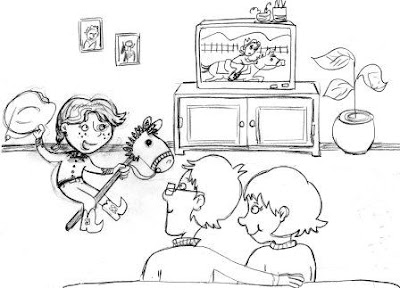 I liked this sketch because it set the scene. The girl is obviously into being a cowgirl and riding a horse, shown by the show that she's mimicking. Then I thought maybe I should show all of the parents. So I reversed the viewpoint, losing the television. 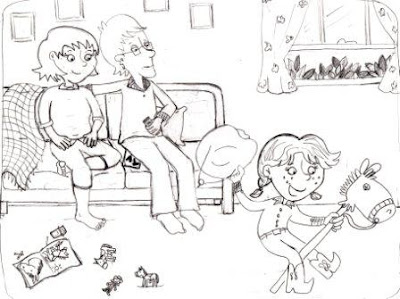 Now the focus is on the girl and her stick pony. Since I lost the television and its suggestive powers, I put some toys and other horse items on the floor to indicate that this just isn't a one time dress up play. 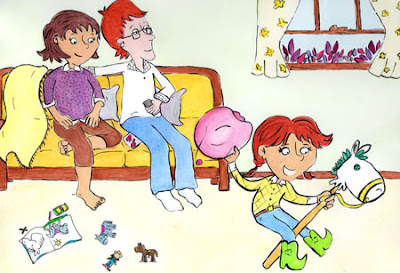 And here's the color final. I'm not sure I really like the washes I've been doing for the backgrounds. I'm still playing around with how I want to fill in those big spaces, and I think I want to head back to what I was doing before: lots of brush stroked that hint at texture and energy.

Off to draw some sequential scenes of some of my favorite characters and their adventures. We'll see if I finish them in time for the conference this weekend. I think I really want to take my time with them, though and give them all the time they deserve. Treat them like a fine wine instead of rushing them, just to have them for the conference, you know? I think it'll be much more fun that way. I'll post wip sketches as I complete them. Happy Valentine's Day y'all.
Posted by Diandra Mae at 4:05 PM