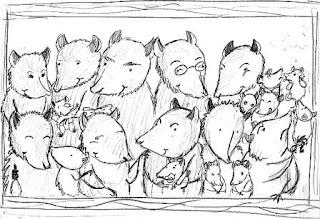 This week's entry was inspired by my extended family. It includes my father and mother-in-law, as well as my husband's siblings: two sets of fraternal twins. His sister has four boys, his oldest brother is married and has two girls and a boy. The next oldest brother is married and has a baby girl and a boy, the youngest isn't married and doesn't have any kids. Then there's my husband (the oldest) and me, with a baby boy. It's a very large family- making gatherings very loud, especially with all of the boys in the family. In the last year the family has grown with the additions of two baby girls and two baby boys. We often make the joke that there are enough grandkids to make up our own baseball team. :D

Note: I was hoping to have enough time this week to post a painted piece, but life has other ideas. Maybe I'll be able to post a final version of this next week, after I'm done with my Monthly Challenge piece.