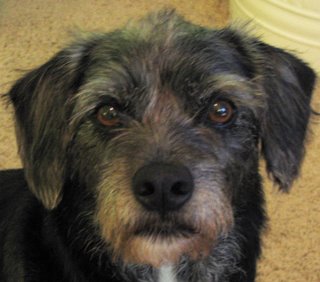 A couple of people have asked me about the dog in one of my recent posts. For the record, it's a he and we have no idea how old, or what kind of dog he is. Both of our dogs were adopted from one agency or another, and are fixed as well as fully vaccinated. (Love your pets!) This dog became part of our family four years ago.
My husband and I were living in an apartment south of Houston with my dog, Chloe. Chloe had come to Houston with me the year before, and she was a teeny wussy little dog, but I loved her anyway. (I picked her out from a litter that had come into the SPCA I was working at before I moved to Houston. She was the runt.)
So it goes that Troy wanted to get another dog. A manlier dog. A dog that didn't look so she-she poo-poo. I didn't really agree with him, because our apartment was kind of small, and we had no backyard. What big dog could hold it all day when we were at work?
Apparently Troy disagreed with my disagreement, and I come home one day from class to find him gone. "Where the heck did he go?" I wondered to myself. Not ten minutes later I hear the front door open and Troy talking to someone. "Great," I thought, "He brought company over with no warning. I'm going to kill him!"
Turns out it wasn't company, it was the ugliest dog I had ever seen in my entire life! I was going to kill him! The dog ran in circles around our living room, freaking Chloe out. I asked him, "What did you do?" He smiled and said, "I got a dog!"
Four years, and several trips to the groomer later, we still have that dog. His adopted name was Merlin. (Whattheheck? Stupid name for this dog.) I renamed him Murray-more macho you know. Troy continues to call him that name, but I gave him the nickname of Mo. I only call him Murray when he's in trouble. Oddly enough, he recognizes that.
After four years of breaking him of digging up and shredding carpet, gnawing on chair legs, digging holes to China in our backyard, and devouring gates, he is one of the best dogs ever.
Plus, he's unofficially MY dog now.
Posted by Diandra Mae at 4:51 PM