Black and Yellow, a Sneaky Fellow

Last weekend I attended the awesome Austin SCBWI Destination Publication Conference. (I'm not going to attempt to recap it, as Cynthia Leitich Smith did a great job.) Besides the fantastic opportunities of hearing Marla Frazee speak to the conference (and to the illustrators in a breakout session) I was also able to display my portfolio and participate in a silent auction fundraiser for the Austin SCBWI's illustrators.

This year, the object was to decorate a simple three dollar frame from IKEA. I volunteered because the possibilities were endless! I mean, how many cool things could you do to a simple 10" by 10" wood frame? In the end, that was exactly my problem. I had that frame in my possession for almost a month, and with the conference a week away I still hadn't decorated it!

I finally settled on doing something inspired from Alice's Adventures Through the Looking Glass. After all, the frame was basically a mirror. But as I went through the story I realized the things I really enjoyed about Alice's adventures were mostly things that happened to her in Wonderland. To Wonderland I went.

One of my favorite parts is when Alice is trying to recite Isaac Watts' nursery rhyme, "Against Idleness And Mischief" and it comes out as a poem about a crocodile. That scaly fellow became my muse and the process began. 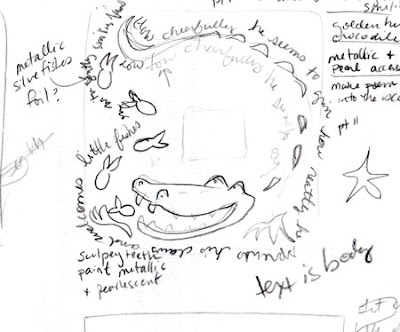 I wanted to make sure the crocodile had that slithery, sneaky feel to him, so I tried different versions to figure out the best positioning for him. This is the one I ended up with. 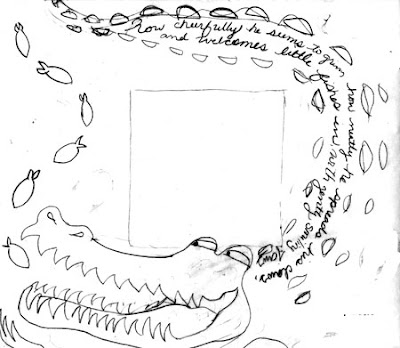 Because the frame has a gloss on it, and I didn't feel like sanding it, I opted to try something fun and use Sculpey-a polymer clay.

Here is the head and claws after I've carved them out. At this point, the plan is paint the crocodile with gold and green accents, and add a sheen to his tan body. 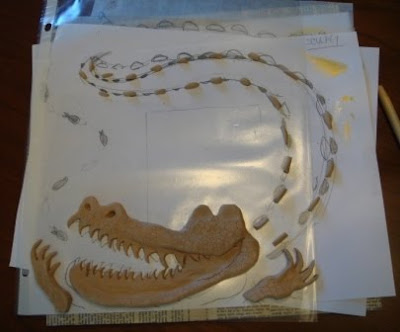 I've carved scales into his body and I start figuring out the logistics of where his back scales will be on the frame. 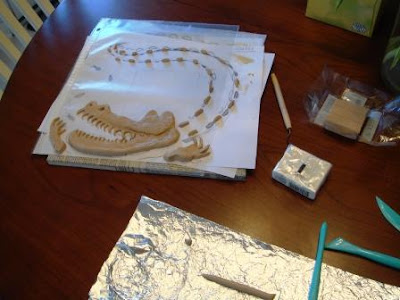 Here is my workspace and tools. I'm about to open the white scupley for his teeth and claws. 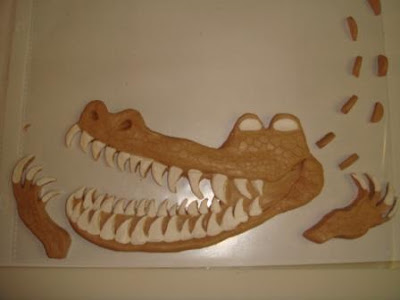 A smile any dentist would be happy to work on, I'm sure. I was channeling Doctor DeSoto big time at this point! And then I realized something. The poem talks about golden scales. A bumblebee (the subject of "Against Idleness And Mischief")is black and yellow. The frame I have is black. This crocodile needs to be yellow! Out came the craft paints, and the process began anew. 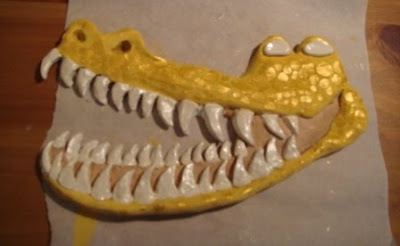 Fresh outta the oven, here is the croc after I've added his new color and the metallic accents for his scales. Look at those pearly whites! 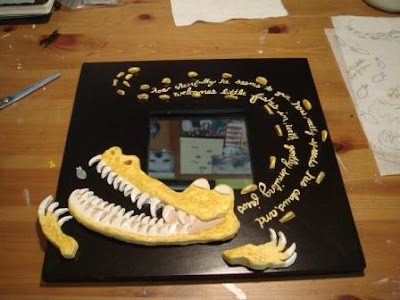 Here I've adhered him to the frame, added the poem lines as his body with paint, and am now working on the little fish that will he's convincing to swim into his smiling maw. 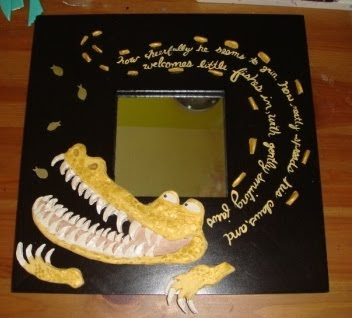 And the final product. (Sorry about the glare!) All fishes accounted for-momentarily anyway-haha! I was very happy with him when I finished, and hoped that others would appreciate him as well. Needless to say, when I saw a little competitive bidding going on over him during the conference I was more than a little thrilled. Today he is hanging in the home of an illustrator pal, showing off all of his golden glory.
Posted by Diandra Mae at 5:03 PM