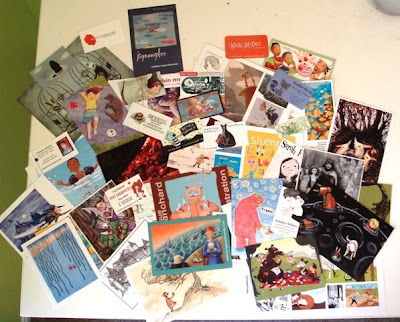 These are some of the postcards I collected at the Portfolio Showcase Saturday night.

By Sunday we were all kind dragging our sorry behinds into the ballroom. It was obvious from the amount of empty seats that a lot of people had had a really good time at the ball. Well, they missed out because the uber-talented Dan Yaccarino was our morning speaker. His talk was called "Say Yes!" Basically Dan works his butt off, and every opportunity he gets, he says yes to. Many times it's been saying yes to something he has no idea how to do, but he figures it out. (including telling a book editor upon their first meeting that he had a completed book at home, and didn't! He banged it out in one afternoon, and turned it in the next day!) It was a really excellent talk with lots of video clips from his shows, Oswald and Willa... A few quotes include: "Getting to write and draw pictures for kids books is like eating ice-cream and getting paid for it!" "What you love is what you write about" and "You should need to pick up a pencil, not just when the publisher calls. It should physically affect you when you are unable to create." So true!

Next up was superstar Holly Black who talked about writing fantasy. It was a really excellent talk that was cut a little short as we all had to move on to our first morning sessions. Mine was Jim Averbeck's Writing for Illustration. Oh man, was this an excellent workshop! He said that as picture book authors, the goal is to "create stories with illustratable text while leaving the story open enough for illustrator freedom." He talked about having a strong variable setting, using action and movement, unique characteristics, mood, character interaction and visual complications. He explained each factor, provided an example and then explained why that example worked. Then he gave a few things that will kill illustrations: overspecific, descriptive, beautiful language that does nothing for the story and shoves "lessons" down the readers throat. He even made up an awful example to make his point-haha! Jim Averbeck is definitely a natural teacher, not to mention a nice guy.

Following that was our Golden Kite luncheon where we heard the Golden Kite winners speak, as well as have our hearts pierced by the inimitable Richard Peck. Boy was the room (including me!) doing some eye dabbing when he was done. I can still recall the immense emotion he inspired. *whew!*

On to the afternoon, which included Elizabeth Parisi once again, this time discussing Book Dummy Smarts. I was surprised to learn that after an illustrator works with a house for the first time, they can usually get away with a storyboard dummy instead of a fully mocked up book. She left a lot of room for Q&A as well, but one gem I got from the session was that if we want to illustrate, then we need to focus on illustrating for now. Later, when we've established ourselves, we can bring up the fact that we may have a story we'd like to publish. She says not to give a house another excuse to reject you, which can happen if you're submittig a dummy.

Following that session we listened to my pals and I once again skipped out on how to deal with the challenging changes of publishing and headed out to dinner at Rock Sugar. It was a divine meal with lots of talking and laughing and eating! Oh, what a wonderful time. *sigh* I want to do it some more! hahaha!