I ended up drawing two more dummy books after my last post. I just kept playing with different elements and page counts. I finally decided to stick with a traditional 32 page count for my books, although I reasonably completed it in 24 in one of the dummy versions. Then I was figuring out how to stagger the layout so that the four double spreads I had were actually on facing pages. Fun stuff I tell ya! 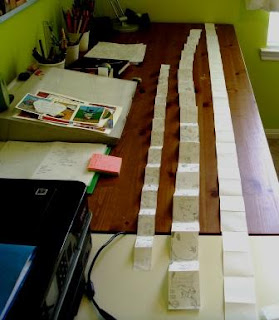 Here are three of the four dummy books spread out across my work table. Since I was playing with page counts so much, I ended up taping together four page counts and then drawing the images on the paper. It made it easier for me to make sure my double spreads were where they were supposed to be.

The actual drawing really didn't take too long. By now I've drawn so many of the images over and over, I was worried they were becoming stagnant. So I made notes to myself on certain pages about different perspectives, details and positions to try out before I committed to the final art. 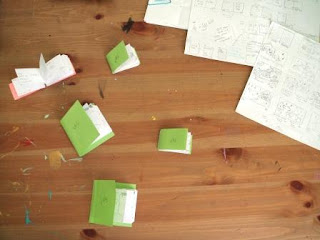 Here are the four dummies and one storyboard dummy. They are as small as they look. 2.5 wide and 2 inches tall. I didn't feel so bad about using so much paper then. Each large book only took 2 sheets of paper to make. (or should I call them signatures?)

I now have the full-scale pencil art to draw up. I'll use the dummy to guide me, but don't want to restrict myself too much...if a really neat idea comes up for a picture I don't want to block it! I hope to complete this tomorrow and pick out the two or three pages that will become full-color samples on Tuesday.

I'll post at least one image of the full-color spreads later this week. (fingers crossed!)
Posted by Diandra Mae at 6:29 PM