So! What'd you do this weekend? Me, not much....okay, okay. I guess I'll let you know what happened.

From the last post you could see that we planned to evacuate Thursday morning. We did, with no problems. Our town wasn't under mandatory evac (yet), and most of the evac traffic was coming from the southwest (Brazoria county-the original point of expected landfall). Houston did a very smart thing and opened up all EZ Tag lanes of the tollway for free, allowing traffic to move smoothly out of town.

We were outside of Katy within an hour, and on our way to San Antonio. Traffic was not too bad, but there were a good amount of people on the road. About a half hour outside of Katy, we were greeted with the bizarre site of a caravan of twenty ambulances heading in the opposite direction-towards the storm. My husband and I chatted about how weird it was, and how sad it was that more than likely every one of those EMS trucks would be utilized in the coming days.

Then, within thirty minutes we saw this:

I finally quit taking pictures. There were more caravans, and each time we saw one we fell silent. I felt fear grab me by the throat, and said a hasty prayer that all of those emergency workers and the people they helped this weekend would escape unharmed.

We spent the next couple of days watching the weather channel and reading the internet. We were the worst of the rubber-neckers. We couldn't look away. Had all our friends left town? Would our house be okay? Had all of our neighbors evacuated?

The weather was surreal in San Antonio when we awoke Saturday morning. Blue skies, chirping birds...The first thing we did was flip on the television and see the devastation. Numbness settled over me as we began begging the newscasters to report on our side of town. The eye of the hurricane had passed directly over where our house stood. I cried a little as they showed Galveston and its devastation. I couldn't recognize the landscape, and I grieved for the loss of homes. Words left me when we saw what had occurred in Surfside, High Island and Gilchrist. 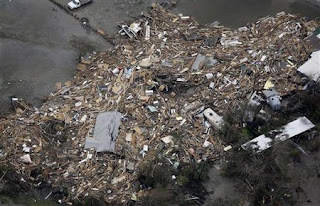 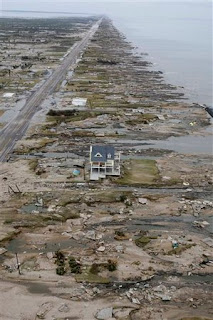 We scoured the internet for word on our neighborhood, finally hitting upon a forum provided by the local news. It looked like our home might be habitable. We decided to head back and check it out ourselves. We were at the end of our rope with not knowing and if it was bad enough, I would load the baby and dogs back up and return to San Antonio.

Monday we took to the highway. If the traffic was any indication, I suspect everyone else thought it was a good day to head back also. Only thirty minutes into our normally 3 1/2 hour drive home we made the decision to get off the interstate and take the lesser-travelled roads to Houston. Knowing it would probably be a long day, we settled in an tried to enjoy the landscape. 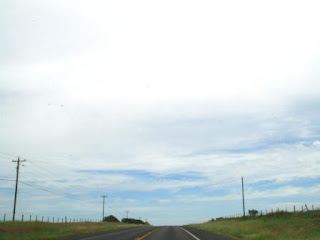 Despite the worry gnawing my stomach, I managed to smile. Just look at these big blue skies, and the rolling grasses. This is part of the reason we love living here. 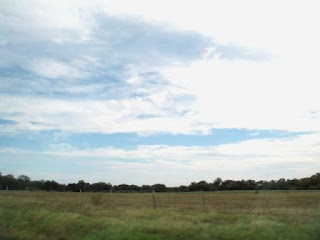 We took our time, stopping occasionally to relieve our dogs, and squirming toddler. As we got closer to home, the empty gas stations grew in number, as did the evidence of strong winds.
Giant oaks atop power lines, split trunks, stripped rooftops.... 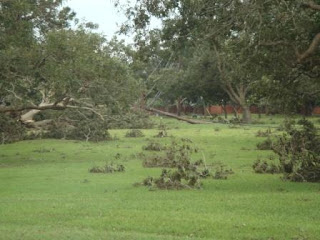 And even more sobering were the teams we saw out and about:

After a seven hour drive, we finally made it back, and saw to our relief that everyone seemed okay. Sure there was no gas to be had for miles, but we had power. Trees and limbs were being cut and stacked, brooms were out in force, but we didn't see any broken windows or missing rooftops.

I'm beyond relieved to say that this was the worst of our damage: 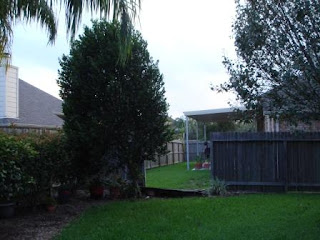 Several sides of our back fence have toppled over, as well as a few of our smaller trees. Our glass topped bar and several ceramic pots shattered, but compared to what could have been I don't much care right now. Our neighbors two miles to the northeast are still underwater and boats sit on top of each other like toy blocks in Seabrook. The Kemah Boardwalk (a local favorite) took a serious storm surge, and who knows how long it will be before it is back up and running. There is a feeling of relief in our neighborhood, but underlying it is worry and grief for our neighboring communities.

Please consider donating to the Red Cross or the Salvation Army. FEMA has set up P.O.Ds all over town. There are also donation stations, and the outporing of genorosity has been wonderful, but more is needed. Some will be in shelters eating MREs and sleeping on cots for up to a month right now. There are still at least a million without power, and water is like gold. Those families located on the Bolivar Peninsula have lost everything. Please, please consider the needs of shelters in your area, or donate to those who are caring for the pets of evacuees. This is going to be a very long, hard road for the millions traveling upon it. 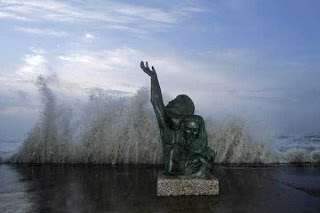 A memorial to those who died in the Galveston Hurricane of 1900, as Ike's storm surge began Friday.
Posted by Diandra Mae at 9:20 PM