A few weeks ago, I headed to my hometown of San Antonio to attend a workshop: "The Exquisite Act of Balancing Text and Art with Richard Jesse Watson."  hosted by SCBWI Southwest TX. My friend and fellow IC and illustrator Akiko White has a great summation of the day here. The day was inspiring, and I enjoyed connecting once again to the "why" of being a book creator.

It was also fun to see the different interpretations of our homework assignment, which was to illustrate a scene from Hundred Acre Woods in a new way. We were supposed to turn paradigms on their heads. I initially froze up on this because out of all the Disney movies, Winnie The Pooh was the most iconic. My childhood memory stored away those stories and songs and it took a while for me to wrestle away from the feeling of  precious nostalgia.

I finally found my inspiration (once again) in food. Specifically this episode of I Love Lucy:


Once I had a starting point, I began with character sketches. I decided that the factory would of course make honeybuns, and of course bees would be in charge.The shift supervisor appeared first, then a few other of the Hundred Acre Woods characters. 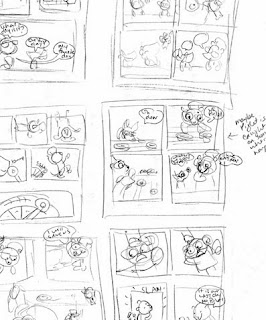 I initially thought I could do an entire mini-comic for the episode, because how fun, right? But then common sense took over and instead I picked what would be the most recognizable scene: the aftermath of disaster. Then, I had to get the composition down. 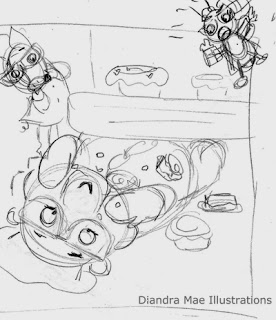 Then I realized I was complicating matters and moved Pooh out of the way.  I cleaned up the sketch, moving Piglet to make him part of the action. 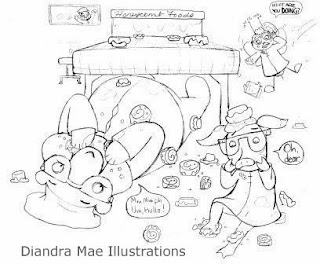 I scanned the sketch in, cleaned it up, adding texture and color.
And ended up with a pretty fun illustration. I actually had the floor blue as well, but something felt off about it, so I switched it to the warmer tone and instantly the illustration seemed more unified. This was a fun assignment, and I'm glad I did it. It's nice to flex those drawing muscles for something outside the box every once in a while.
Posted by Diandra Mae at 1:44 PM