This sketch was inspired by my son's birthday a few weeks ago. He's very into dinosaurs (he rivals a T-Rex in many ways) and turning four he's prooudly proclaimed himself a "big kid."  ;) 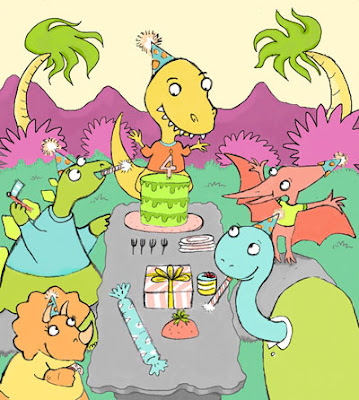 I still need to tweak the colors a little, add shading, etc. but I wanted to share the mostly-done color version of the sketch so many of you helped me out with! (Originally those trees had orange tops, but then I realized they were a little too "Lorax-y" so switched them up.) Hip-hip hooray!
Posted by Diandra Mae at 2:46 PM