Fresh, adj.- full of, or renewed in vigor: refreshed 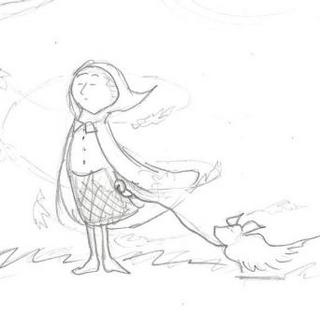 This is the first sketch I came up with when I saw that this week's I-Fri topic was "fresh." Despite the commonly held notion that Autumn is a time of decay, I think of it as a refreshing time of year. There's crisp scents, fresh harvest fruits, cool breezes and startling array of fall colors.

The girls was a little older than I wanted her to be, so I attempted to make her look a little younger. Here's the second version: 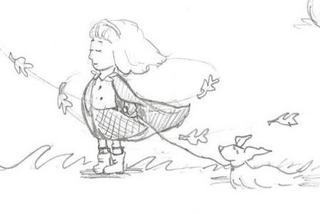 I kept the sketch loose, and played around with the dog a little. My own puppy was the inspiration. She's basically a small mop on legs (like a mini "cousin It"), and any time the breeze blows, that's what she looks like. 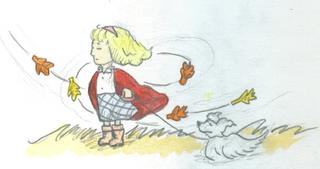 Here's the final version. I think it's a little stiff and the cape's a little too small, but I wanted to keep it simple. Here's a quote I found that I think expresses the mood I was attempting to display: "It was one of those perfect... autumnal days which occur more frequently in memory than in life" P.D. James

I think I'm going to attempt some other illos with this girl and her dog.
Posted by Diandra Mae at 6:35 PM